As described earlier in this Wiki, the TDA and the SAP are both part of the same process – the Transboundary Diagnostic Analysis/Strategic Action Programme Process. The TDA is the analytical component that identifies and analyses the transboundary problems, their impacts and causes. The SAP is the strategic component that focuses on strategic thinking, planning and implementation. 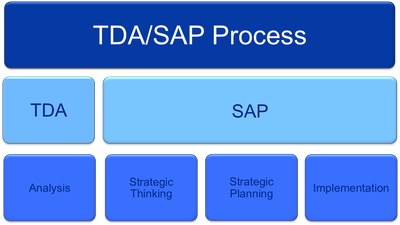 Many TDA and SAP documents have been developed during 2 separate processes with poor linkage between the ‘technical, non negotiated’ TDA and the ‘political, negotiated’ SAP.

A number of practitioners, both project managers and international experts, have also commented that the relationship and linkage between the TDA and SAP is not robust. As a technical document, the TDA works well but as a decision making tool it is often weak. Consequently, SAP interventions do not always match TDA priorities. This is particularly apparent where the TDA has been developed during one IW project and the SAP during a second IW project.

Failure to recognise that the 2 components are not separate entities; that they are in in fact part of the same strategic planning process, is likely to have a negative effect on the development and implementation of an effective and SAP.

In order to ensure that there is a strong linkage between the TDA and the SAP, it is important to get the strategic thinking process underway during the final phase of the TDA process. This doesn’t compromise the idea that the TDA is an objective assessment. Ultimately, the TDA document should focus on the priority transboundary problems, their impacts and causes (including governance issues). However the TDA process can also include the first step in the strategic thinking process – the identification of Leverage Points.

This section discusses leverage points. In particular, it focusses on: