What are International Waters and why are they important?

In the context of this manual, International Waters are transboundary water systems which include: river basins where water flows from one country to another; multi-country lake basins; groundwater resources shared by several countries; or large marine ecosystems (LMEs) bounded by more than one nation. 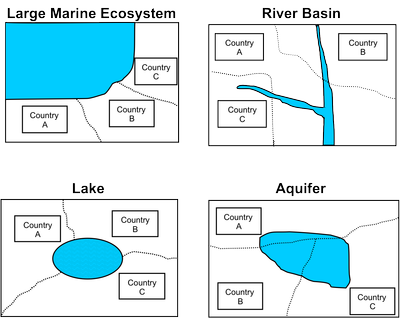 These large International Water systems, which cover most of our planet, do not respect political borders. They are often managed in a national and fragmented way that impacts on environmental goods and services, endangers the food supply and affects the livelihoods of billions of people. By exploiting these shared resources in unsustainable ways, humanity faces a potentially difficult future characterized by the depletion of water and marine resources, increased poverty, and greater conflict.

Groundwater resources, which account for more than one hundred times the amount of surface water, and cross under at least 273 international borders are even more challenging and it is critical to co-manage such water systems sustainably. Furthermore, all LMEs are ultimately affected by both surface water and groundwater systems.

The threats placed on International Waters are considerable. Demands for freshwater continue to rise, resulting in competition among key sectors and ultimately between countries that share transboundary freshwater systems. In parallel, the human demand for protein from marine waters and pollution releases place stress on both coastal and ocean systems.

The environmental, social and economic impacts are all too apparent—depleted and degraded surface waters, aquifers, and marine ecosystems that have adverse impacts on human and ecosystem health, food security, and social stability. In addition, changes in global hydrologic cycles driven by changes in climate and climatic variability deepen poverty, reduce food supplies, damage health and further threaten political and social stability.

The GEF and its interest in International Waters

As described above, freshwater, groundwater and marine systems together with their living resources know no borders. With 70 % of the Earth being ocean and 60 % of the land lying in cross-border surface and groundwater basins2, most water systems on Earth are transboundary – and thus are at the heart of the GEF International Waters mandate[1].

The GEF International Waters Focal Area was established to enable countries to collectively manage their transboundary surface water basins, groundwater basins, and coastal and marine systems through the implementation of policy, legal, and institutional reforms and investments contributing to sustainable use and the maintenance of ecosystem services. To achieve this the GEF is currently working toward the following objectives during its current funding cycle (GEF5[2]):

Patterns of intensive and conflicting uses of water resources in transboundary surface and groundwater basins are resulting in significant ecological and economic damage, reduced livelihoods for the poor, and increased political tensions among downstream States. These impacts become exacerbated with increasing climatic variability.

The use of Integrated Water Resources Management (IWRM) plans/policies at the basin level has been identified as an answer to balancing conflicting uses of water resources. Benefits of collaboration on transboundary basins and adoption by cooperating States of reforms in IWRM policies contribute to improved community livelihoods, increased crop yields, sustainable irrigation, improved environmental flows, and reduced health risks where pollutants create risk.

Under this objective, GEF supports further development and implementation of regional policies and measures identified in agreed Strategic Action Programmes (SAPs), which through collaborative action would promote sustainable functioning of already existing joint legal and institutional frameworks or help establish new ones. GEF assistance to States includes development and enforcement of national policy, legislative and institutional reforms as well as demonstrating innovative measures/ approaches to water quantity and quality concerns. The projected impact will enable States to negotiate treaties and better balance conflicting uses of surface and ground water for hydropower, irrigation-food security, drinking water, and support of fisheries for protein in the face of multiple stresses, including climatic variability and change.

Coasts and oceans are experiencing increasing threats to their functioning. Especially serious are reductions in the ability to provide protein for food security, livelihoods, and foreign exchange as well as diminished capacity to absorb carbon as part of the ocean’s role in sequestering carbon dioxide.

Under this objective, GEF project support focuses on the implementation of SAPs with reforms and investments that produce results. Policy, legal, institutional reforms and multi-agency strategic partnerships that contribute to the World Summit on Sustainable Development (WSSD) targets for recovering and sustaining fish stocks are a priority, including regional and national-level reforms in legal frameworks and governance, access rights, and enforcement in LMEs.

GEF also supports investments in sustainable alternative livelihoods (such as sustainable mariculture), habitat restoration and limited use designations such as fish refugia, technical assistance, promotion of less destructive gear to reduce stress on wild fish stocks, and support for implementation of the 1995 International Code of Conduct for Responsible Fisheries in Integrated Coastal Management (ICM) and in LMEs.

Experience has shown that multiple country projects are more cost-effective than individual country IW projects in catalyzing commitments to collective action. Where capacity and agreement among States is not yet built for collectively addressing transboundary concerns or where climatic variability and change are not yet incorporated into adaptive management frameworks, an enabling environment for action can be created through GEF supported foundational processes.

These processes include: establishment of national inter-ministry committees for project participation, development of Transboundary Diagnostic Analyses (TDAs), third-party facilitation, stakeholder participation, and formulation of Strategic Action Programs (SAPs) with shared visions and agreed reforms and investments. These enabling activities also focus on capacity building and technical assistance for legal and institutional aspects of multi-level governance reforms for transboundary water systems needed not only at the transboundary level but also at the sub-basin, national, and local levels.

Despite covering 40 % of the planet, Areas Beyond National Jurisdiction (ABNJ) lack comprehensive legal instruments and normal management options. ABNJ are threatened by: increasing pelagic fishing for highly migratory species and bottom trawling for deep-sea species on seamounts, ridges, and other features, maritime navigation, extraction of hydrocarbons and mineral exploration, and other emerging activities such as ocean fertilization, which affects the marine environment.

ABNJ, deep seas, and open oceans are all eligible for GEF project support. Protection of deep-sea species, marine biodiversity, and seamount habitat can be greatly improved through enhanced capacity of regional fisheries organizations to manage according to ecosystem-based approaches and application of conservation tools.

Use of existing legal instruments may be tested along with market and industry approaches. NGOs and other stakeholders with capacity to contribute to the testing of measures and management options would be supported to contribute to urgent need to reverse depletion and habitat degradation.

[1] The GEF use of the term “international waters” is at variance with its use under the United Nations Convention on the Law of the Sea (UNCLOS) where the term ‘High Seas’ (equivalent to the “international waters” of previous maritime conventions) is restricted to marine waters beyond those within national jurisdiction and the exclusive economic zones of states.